We are pleased to announce that Dr. Cristian Axenie, the head of the AKII Microlab has been awarded an nVidia GPU Grant. The grant consists in a cutting-edge processing system for Deep Learning applications based on Titan Xp GPU that will be used for the latest project that Schanzer Racing Electric (SRE) team at THI started: Neuromorphic Processing for Electric Autonomous Driving.

The project aims at broadening the vision of the SRE towards adopting new sensory technologies and novel processing algorithms for autonomous cars. Despite the small scale scenario, the SRE Formula Electric Car offers a great platform to test hypotheses and experiment with such new technologies. The global aim is to improve the competition results by using novel approaches for environment perception through the combination of neuromorphic sensors and deep learning networks, and a proper processing infrastructure that nVidia GPUs offer.

nVIDIA’s Academic Programs Team is dedicated to empowering and collaborating with professors and researchers at universities worldwide. The aim is to inspire cutting-edge technological innovation;and to find new ways of enhancing faculty research as well as the teaching and learning experience.

The media coverage from the Facebook page of Schanzer Race Electric: 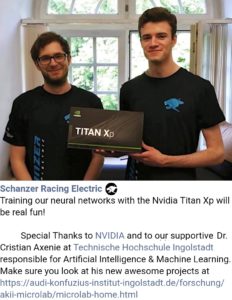